skip to main | skip to sidebar

Update on the Puppy Mill Bust in Quebec

Last we heard, Shiba Rescue GTA is expecting up to 10 Shiba Inu into their care.  They are finding foster homes, but would appreciate any donations to help cover medical costs, including spay/neuter.
Posted by Tatiana & Bailey at 4:14 PM No comments:

This was posted on Shiba Rescue GTA Facebook page.  Quebec Puppy Mill Bust Update: The owners of the largest puppy mill bust in Canadian history were charged with over $10,000 in fines for 17 offenses which resulted in the seizure of over 630 dogs of various breeds. The Shiba Inu breed was counted amongst the dogs seized. As of the writing of this message, Shiba Rescue GTA will be taking into their care, the seized puppy mill Shibas. We are unsure ...of how many are coming into our care, but know for certain that a minimum of 4 Shibas have been identified. If you wish to help these Shibas we are seeking financial help (all of the Shibas are breeding dogs and need to be vaccinated and spayed/neutered and offered Veterinary care (some have skin issues) to offset some of the financial burden from our small rescue. Any offers of help would be gratefully appreciated. It is not often that our rescue has been placed in this type of position to help "local" Shibas. Please let us do this to the best of our ability. Donations can be made through PayPal and e-check through our website of : www.shibarescuegta.com. Thanks so much and I will keep you all abreast of what happens with these mill dogs.
Posted by Tatiana & Bailey at 5:34 PM No comments:

Hey Shiba pals!! Shiba Rescue GTA is now taking orders until Nov. 3, 2011 for their awesome 2012 calendar featuring the adorable Shibas from the Toronto Shiba Inu Meetup group! Cost is $20US/CAN. Shiba Rescue GTA is the ONLY known Shiba rescue in Canada. They help Shibas all across Canada, and also from the U.S., so please purchase a calendar (or more) and help support your breed! Go to SHIBA RESCUE GTA and contact them to find out how to order. Thanks!
Posted by Tatiana & Bailey at 10:21 AM No comments:


Ahhhh, fall is in the air...cooler weather, roohoo!!! I've had a miserable summer. Way too much humidity for my liking. I blew my coat the entire summer, stopped for about 2 weeks, and now I am starting again. Mom is thrilled. She keeps threatening me with a bath to loosen up the fur and get it overwith or something. All I know is that it's cooler outside, which means longer walks for me!!!! I had a hard time all summer. I love my walks, but in that heat, I would be the first to turn around to head home. Sometimes, even after 2 minutes, it was too much for me. Mom always brought plenty of water for me and took me out during the coolest times of the day. We even looked into jackets made especially for dogs to deal with cooler weather, but for one reason or the other, Mom didn't like them or the ones she did like, wouldn't fit me, humph. She took good care of me though :)

Hey, my 7th birthday is coming up this month, so a big shout out to my one and only sibling, my brother, Storm!!! Mom already gave me my first birthday gift - a stuffed snake, I love it love it love it!! It doesn't have stuffing inside, it has large funny squeakers, and it's tail rattles to. I have fun playing with it. My 2nd birthday gift (Mom says it's my gift for the rest of my life) is a fence for my new backyard! We are moving in a few weeks, and I will have a HUUUUUGE back yard to play in, I can't wait!!

Wow, so many exciting things going on. I need to take a nap. Behave yourselves all you Shibas. Well, make your owner think that you are ;)

Pre-order your 2011 Toronto Shiba Inu Meetup group calendar. All proceeds go to Shiba Rescue GTA. Payment can be made via PAYPAL by using ID "shibarescuegta@yahoo.com"

You can never have too many Shiba Inu calendars, and these make wonderful presents for Christmas too!

Calendars are $20CAN each, and will be mailed mid-November! Please tell all your friends and family about the calendar, and help your favourite breed!

Our cat, Tatiana, and our dog, Sushi, have grown up together. They are both 7 yrs old. They got off to a rocky start, though. Tatiana was 5 months old when we brought 2 month old Sushi home. Tatiana growled, hissed and swatted at poor puppy Sushi. Sushi wouldn't come out of his crate if she was around. This lasted for about a day and a half. Finally, Sushi had had enough! He came racing out of his crate barking his head off at Tatiana, who quickly ran off. After that, they were the best of pals. Since they were the same size at that time, they would chase and wrestle all over the livingroom, it was pure fun and entertainment! As they got bigger, they still continue to play, and Sushi often mimics how Tatiana uses her paws. But, Sushi likes to be sneaky and tries to get in a few hipchecks now and then. Tatiana is almost always the instigator. I took this video the other night, as this goes on every time I am preparing their supper. You'll see our other cat, Bailey, for a few seconds at the beginning, she doesn't like to get involved!

Shiba Inu Mistaken for Coyote Released in the Wild

Ok, Shibas are always thought to be a fox,a husky, maybe even a wolf. But, this goes beyond ridiculous and I sincerely hope that Copper is found safe and soon, and returned. I realize the Shiba Inu is not a common breed, but I think this goes beyond a mere mistake.

[b]Please make sure your Shiba is not only microchipped, but is wearing a collar or harness whenever outside.[/b] - Bonnie & Sushi

Imagine if your dog got loose and was taken in by the local humane society, only to be handed over to law enforcement authorities because your dog was mistaken for a coyote. (OK, I know most dogs would not be mistaken for coyotes, but bear with me.) Then imagine if animal “experts” told authorities that coyotes are nuisance animals, and that they had two choices: Euthanize the animal, or return it to the wild.

This was the scenario in Frankfort, Kentucky, when Lori Goodlett’s Shiba Inu, Copper, ended up in the hands of police after being rejected by the Franklin County Humane Society because someone there thought she was a coyote. The police, not wanting to have to kill Copper, took her to an open field and released her, according to a story on WKYT.

Goodlett doesn’t hold the police accountable. At least they didn’t kill her dog. In fact, when officers later saw Copper’s photo on flyers Goodlett had posted and realized what had happened, they began helping her try to find her dog.

Copper is still missing. Goodlett would very much like to have her back, and spends a lot of time fielding phone calls from people who think they have spotted her. But so far, no leads have panned out.

This is so sad. I think of how Jake would fend if released into the wilds of Kentucky. Unless he ran into Col. Sanders wielding a bucket of fried chicken thighs, he’d probably be a goner. I hope Copper found her way to a kind home and will soon be returned to Goodlett for a very happy reunion. In the meantime, someone needs to get the Humane Society a very good book on dog breeds. And perhaps am equally good lawyer, too.

Shibas Meet With Troy & Emmie of Hike for our Heroes

If you own a Shiba Inu and have not heard of Troy & Emmie yet, you must not be active enough in the Shiba world of yahoo groups, facebook and twitter ;) Not to worry! Now is your chance to follow them on Facebook & Twitter simply by going to their website Hike for our Heroes

Troy is a war veteran walking across the country to raise funds and awareness to military families in need. His faithful sidekick, is 3 yr old black & tan Shiba Inu, Emmie. Emmie is also a certified Therapy Dog, and during her off hours, likes to chase ducks even if it means diving into a swamp! Troy's goal is to raise $5 million.

On their website, you can follow where they have been and where they will be going to. You can also buy merchandise to support them, and see photos along the way. And, of course, make donations.

This past weekend, approximately 15 Shibas from Missouri and Kansas met Troy, his wife, and Emmie. It was a lot of fun, and the Shibas behaved themselves perfectly. Even when the KC mascot came out to taunt them!

Here is a video and some photos from this past weekend.

Attention all Shiba Inu in or near Kansas City, Missouri!

Have you heard about Troy & Emmie yet? Would you like to meet them, and also be a part of Animal Planet's show Dogs 101? Read on...

Iraq War Veteran Troy Yocum is hiking 7,000 miles across America, banging his drum and sounding the call for $5 million to help military families in need. With Emmie the SuperDog by his side, he took the first step of his 16-month quest on April 17, 2010. Their website is DRUM HIKE

I've spoken with Troy and a rep from Animal Planet (this is for the show Dogs 101) thru a conference call. A lot of ideas are being thrown around, so nothing is set in stone. But, this is what we are hoping for:

To meet Troy & Emmie in Kansas City, MO on Sat. June 26th at an AppleBee's (location to be determined). Troy will be there for a pancake breakfast from 8-10am. Shibas will be on leash of course, while walking with Troy and Emmie as they leave KC. We are hoping to involve MSIR (I will be sending out emails & posts on the yahoo groups).

For now, what we need to know is:

1. How many of you are willing to commit to attending on that Saturday morning? The more Shibas the better obviously! Please email me at c_and_b2002 @ yahoo.com Please note how many Shibas will be attending, as this is very important.

2. If any of you know any military families with a Shiba Inu, please have them contact me asap at c_and_b2002 @ yahoo.com Troy & Animal Planet are hoping to find a way to include them in the segment.

3. Emmie dove into a swamp this morning to chase after baby ducks and lost her Missouri Shiba group bandana. If anyone has one they are willing to give to her, please let me know as well. I will try to find Sushi's though, since he doesn't normally attend, but it might still be packed away. I might be able to get one ordered though.

The other date available is when Troy walks in to KCMO, which is Wed. morning June 23rd. I mentioned Saturday would be a chance of a better turnout, so let's hope it happens on the Saturday!

I will be posting this on Facebook, Twitter, on Sushi's blog, and everywhere I can think of. If I could ask you to do the same, I'm sure Troy & Emmie would greatly appreciate it. I don't mind my email being given out, and people can contact me regarding this.

Life with a Shiba Inu 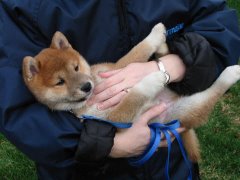 Tatiana & Bailey
Tatiana is a beautiful Dilute Tortoiseshell that is the Queen in our home. Her #1 rule is no running in the house! Bailey is the youngest in the family, a cute black DSH. Her loves are being fed on time! And, occasionally, we will allow pics & blogs from Mom's foster cats!